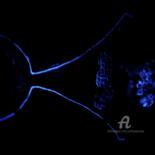 “Profundum”, oil painting with pallet knife on linen canvas 73/54 cm
The 3th window from “Anima Mundi” and the 4th painting from the Templars’ collection, representing the “Money Pit” from Oak Island, New Scotland.
One important question persist. What happened to the Templar's treasure? According to a handful of scholars, explorers and investors, the ultimate destination for the Holy Grail and other priceless objects belonging to the Knights Templar was the famed Money Pit on Nova Scotia's Oak Island. Supporting this theory is the discovery of several peculiar stones found across the island. Combining the meaning of the stones with the engineered sophistication of the tunnel, many rational investigators are convinced that the Money Pit is not simply the treasure chest of a pirate. Instead, they believe it may be the site of the Holy Grail or Ark of the Covenant.

Available as prints from €46

Available as digital files from €30