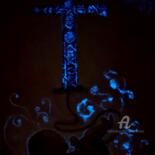 It has been said that....
Holly grail is symbolized by the fact that the Chalice of the Last Supper,which ended up in the hands of Joseph of Arimathea, was also the vessel into which Joseph receive the precious blood that flowed out of Christ’s wound. It was then buried with Jesus,by one of his Disciples, or by his mother, or Joseph of Arimathea, in his tomb. The location of his tomb is not known, but is described in the Bible as nearby, which likely means somewhere on or around the hill.

But....
The idea is that Christ’s sacrificial blood belong and abides in our world with reference to the mystery of the whole human life, the whole human of history, with references to “liturgy” of the world as his substances remains on the earth.
A new etymology for Old French san-graal (or san-gréal), meaning "Holy Grail", by parsing it as sang real, meaning "royal blood".

Available as prints from €46

Available as digital files from €30